“To win Tour of Flanders with a rainbow jersey on your back must be a great feeling.”
“What a way he’s won it….he’s very much in the center of his career.”  —Eurosport announcers

Peter Sagan won the Tour of Flanders this past Sunday.  He rode away from the competition on a steep cobblestone climb.  Sagan has won many races including the World Championship and Tour of California but Flanders is his first Monument, one of the five oldest and hardest races.

Sagan is like a Michael Jordan of professional road cycling.  The flare and grace with which he performs is transforming cycling.  There’s a video clip below that shows Sagan’s poise and the constant drama of a cat and mouse chase at the end of a 255 kilometer (160 miles) race. 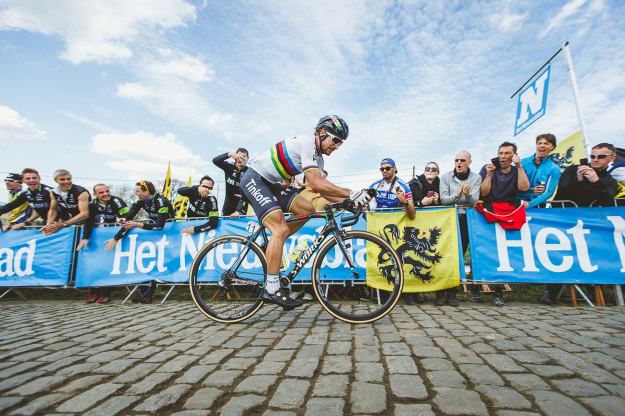 The video clip begins on the climb where Sagan powers away 240 kilometers and six hours into the race.  He rockets down the back side on narrow roads and then finds a rhythm in an aerodynamic tuck to meter out his effort to the finish.  Narration for the story comes from colorful bicycling personalities [“Vanmarcke is going backwards.  He’s falling into the clutches of Cancellera”]  and there’s intimate footage of Flanders’ small towns and settled countryside.

Flanders is the Dutch-speaking northern part of Belgium.  On the run into the race finish we get a look at some Dutch style bicycle facilities with the road.  What really stands out is the fluidity with which Peter Sagan moves with the bike, expressing the bicycle’s enormous capabilities.