“El Paso’s streets are meant to be shared.”  –City of El Paso, streets and maintenance dept.

Bicycling El Paso and experiencing that desert city and the environs reinvigorated my senses.  El Paso is creating a comprehensive bicycle plan.  It sounds good.  The planning is being coordinated with the City, MPO and State, which owns and operates many roads in El Paso.  There are community meetings the next two months.  El Pasoans, make your voices heard.

After we returned to Albuquerque winter arrived.  I walked across the bike/ped bridge to Los Altos Golf Course and took pictures.  I-40 was closed from here clear to Texas.  I have bicycled this bridge from our home over I-40 to the bike/ped trail and back 100’s of times.  The pedaling rhythm is easy to find.  Walking the bridge on a snowy day gave me time to see more. 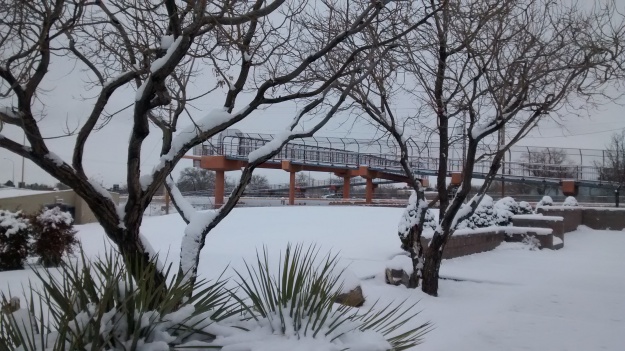 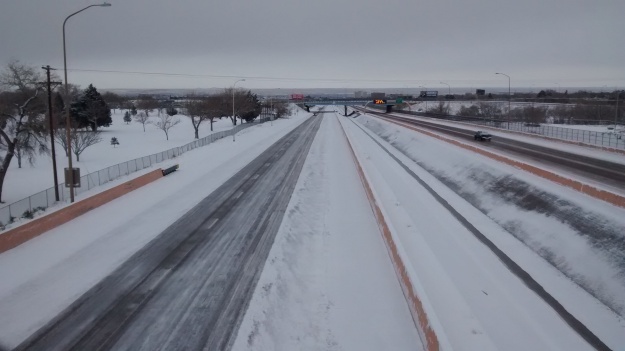 It felt like a blizzard but the next day I was riding outside again.  The power of the intense Southwestern sun.  A different look with mountains draped in snow and chiseled in low angled light.  There’s nothing new on earth, it’s our perceptions that open and attenuate.  Learning is stimulated by seeing distinct and a variety of places, reading, meeting people, being exposed to different ideas and cultures, exercising curiosity, thinking freely, reflecting.  Living.

Today we visited Los Poblanos, an open space preserve in the North Valley on the eastern bank of the Río Grande.  The air whooshed underneath the feathery wings of Sandhill Cranes.  I remember hearing Richard Nelson on NPR talk about how bird flight is simply extraordinary.  Indeed.  Seeing the evening unfold from Los Poblanos was more magical than staying indoors. 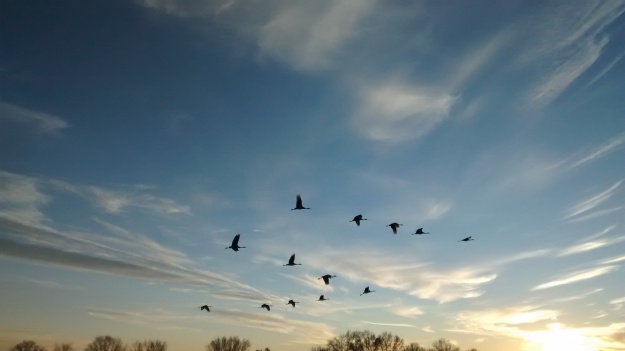 I hope in 2016 I can keep bicycling daily.  I like the discipline of riding well, and the symmetry and sense of discovery it brings to life.  Everyone should have access to these freedoms.

The Federal leadership on bicycle planning is heading in the right direction:
http://www.fhwa.dot.gov/environment/bicycle_pedestrian/guidance/design.cfm

We stayed in El Paso for two days and each morning I bicycled for about two hours.  The Southwest is my querencia, the place where I feel at home, but I still get nervous bicycling in cities when I don’t know my way around.  Bicycling is the best way to learn about your location.  So I did a little research and then headed out and immediately got lost.  I guess that’s exploring. 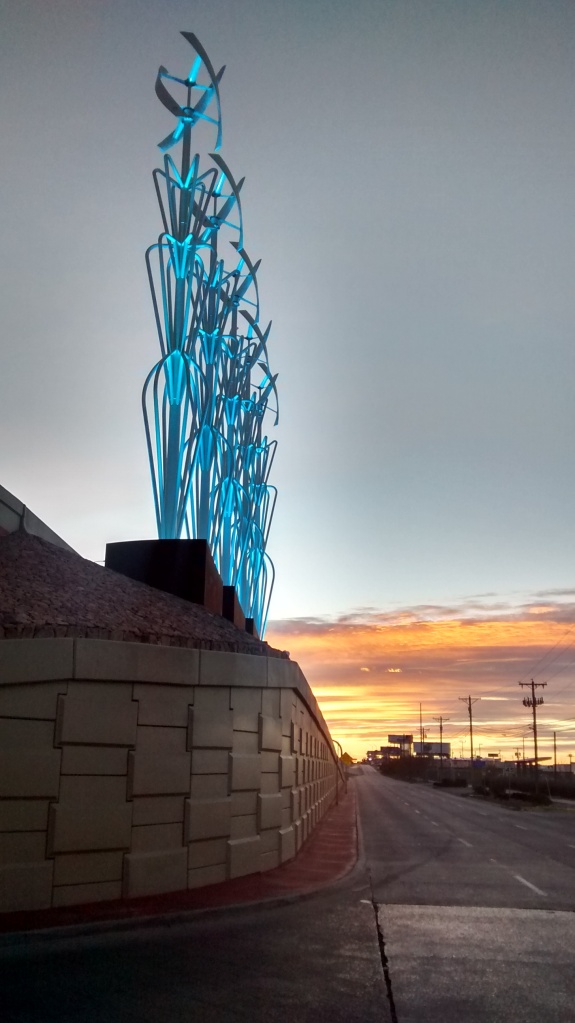 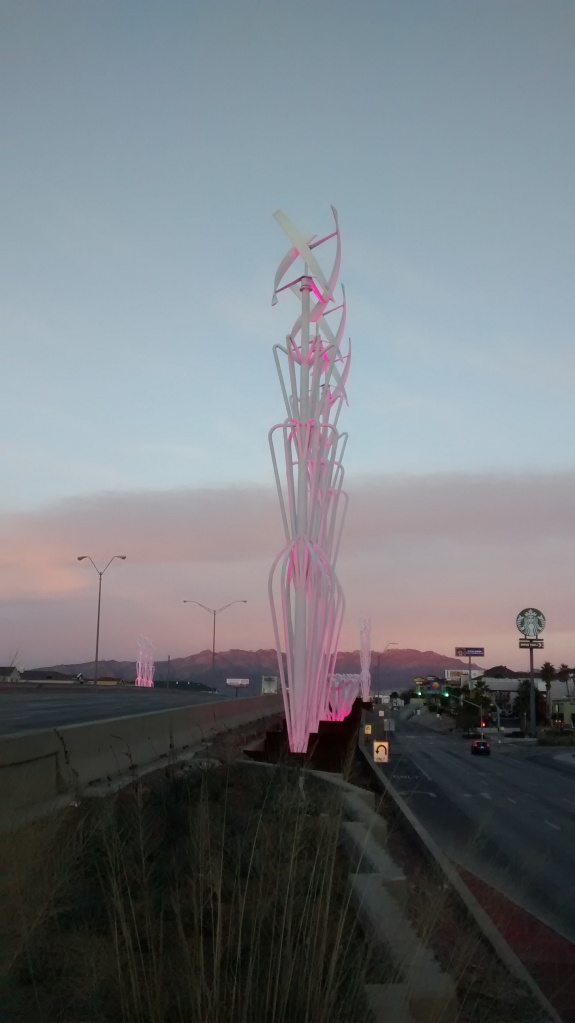 Walking over from the hotel with morning coffee I saw the Franklin Mountains aglow.  El Paso art feels good

Dawn in the Southwest is simply electric.  My destination on day one was Hueco Tanks State Historic Site, about 25 miles mostly east.  I couldn’t find a dedicated bike map so I used the Strava Heat Map to see where people are riding.  The darker the blue lines, the more bicycling.

I used google earth some too to see the roadways beforehand and scout out big intersections.  I decided to use Edgemere Boulevard but that requires about 10 turns to get there unless you use the main arterials.  You can ride all roads abiding by the rules for drivers of vehicles, but I look for streets that are lower stress and attractive while also being direct and efficient.  Smooth and steady bicycle traffic flow, a complete street inclusive of all modes, a nice ambiance and an active and engaged culture are all key components of a good bicycling route.  I studied the maps best I could but once I started riding I went by feel and discovered a beautiful city.  I took Edgemere to Zaragosa Road and then east on Highway 62/180 out into open country.

The shoulder of hwy 62 is wide and smooth from the outskirts of town out into the open desert.  It would be perfect for fast group rides, touring cyclists, and anybody wanting to spin their legs and get their heart pumping underneath the vibrant desert sky in fresh air.  I noticed this is the route the Oryx Challenge Bike Tour takes to raise money for the USO.  It’s a good ride.  Near the Hueco Mountains I turned north on the quiet back road and met Mai for hiking.
On day two I went the other direction to check out Scenic Drive and a few other short climbs up into the Franklin Mountains.  I enjoyed getting lost again but I kept heading west towards the gigantic Franklin Mountains skylighted against a deep Chihuahuan blue, and found Scenic Dr. 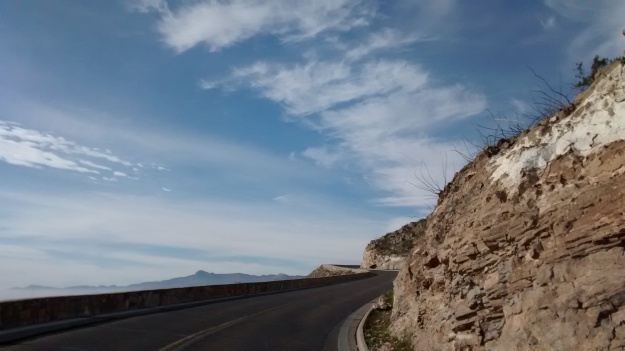 Scenic Drive is unique.  You can get a close up view of downtown from the southern tip of the Franklin Mountains, and see clear into Mexico and the surging mountains beyond.  There are many great roads climbing the eastern flanks of the Franklins.  One is stupendously steep.  I was standing in my lowest gear going way to hard for wintertime, though temperatures were in the 60’s.  McKelligon Canyon road was used in a bicycle race and it’s a longer climb, similar to our La Luz climb in Albuquerque, but not as consistently steep.  It has a nice bike lane and many people were jogging and walking on road, way more pedestrians than cars, always nice. 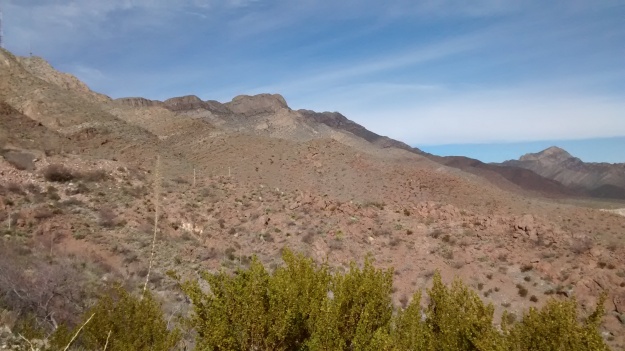 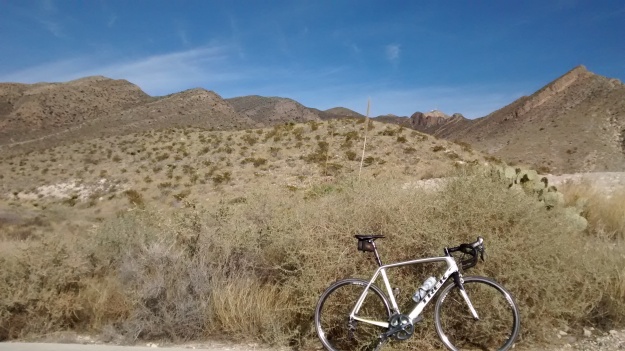 I like bicycling El Paso.  It’s a great city, with farmland up and down the Río Grande valley and mountains prominent above town.  So much character, very diverse.  The emergent bicycling community received honorable mention when Steve Clark of the League of American Bicyclists visited town in 2014.  The Paso Del Norte region shares air, water, and culture between Ciudad Juarez, New Mexico and Texas.  Bicycling culture is a point of convergence.   Velopaso Bicycle-Pedestrian Coalition is working to make the walking and bicycling economy part of the backbone of the region’s sustainable development strategy.  It’s a beautiful thing to witness a movement that moves humans with dignity and protects fragile desert ecologies and resources. 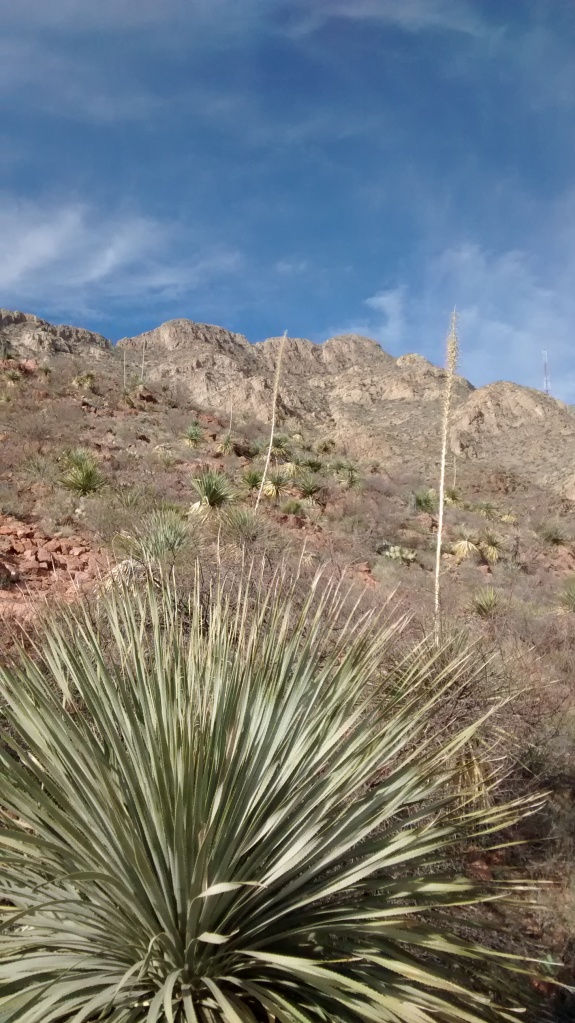 When people want to get moving, the bicycle is there.  We saw six bike share stations by the university and downtown.  It’s a bright morning in the Great Southwest.  Go El Paso!  íVaya! 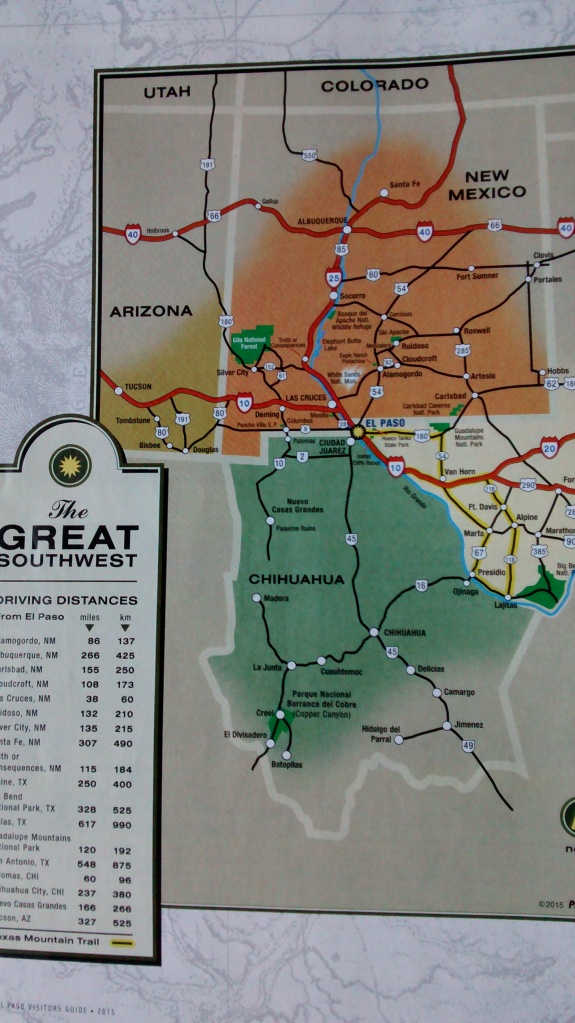