There are complex factors underlying good walking and bicycling environments.  The layout of streets and cities is fundamentally important.   The basic structure of cities changed with the advent of mass travel by automobiles.  By the 1950’s cities were sprawling outwards and people were being encouraged to drive longer distances to work and to meet other necessities.  Streets were designed in longer blocks and for higher speeds and maximized for throughput.   This graph shows one of the undesirable consequences of this. (from Bad Street Design Kills People) 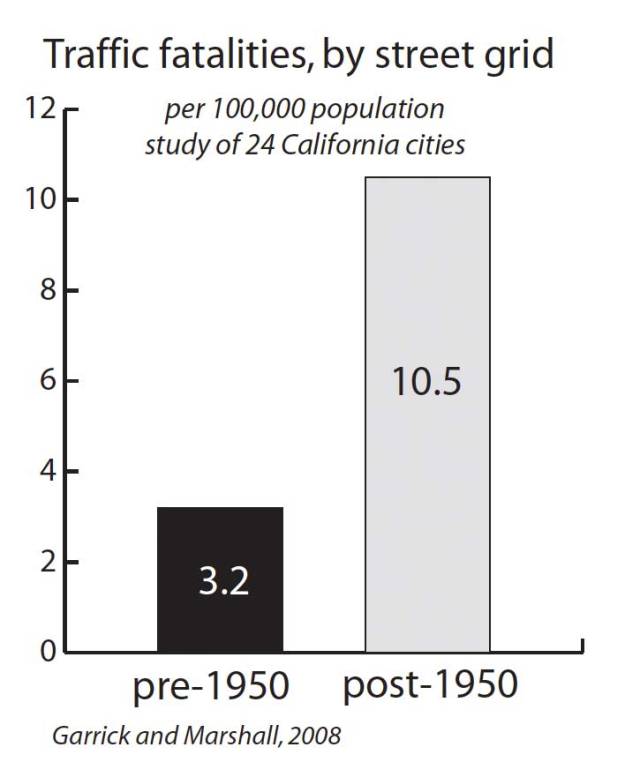 Districts built before 1950  “display triple the walking, four times the transit use, six times the bicycling, and immeasurably more charm” (A. Schmidt, Street Design).  But most of the land in Albuquerque and in all Southwestern cities was developed after 1950.  Albuquerque went form 35,000 people in 1940 to 97,000 in 1950, and grew to 200,000 by 1960.  We have upwards of half a million residents today.  Phoenix went from 100,000 in 1950 to 1.5 million today.  A sprawling network of arterial streets and urban space has been prioritized for fast driving.

The Comprehensive Plan and Rezoning process in Albuquerque is a big opportunity to shift the structure and direct the growth of our city.  Making a city that is safe for bicycling begins here.  This means focusing on quality and building places that endure.  Denser, mixed use development locates more destinations within easy reach of bicycle travel, and utilizes the bicycle’s agility, maneuverability and compact footprint to best advantage.  Incentivizing stronger transit systems through transit oriented development makes cars optional and delivers people within walking and bicycling distance (1-3 miles) from every destination.  Enabling people to move via high speed transit all over the city would help build a more connected and livable city.  Citizens can spend more time and allocate more resources for doing what they want to do, and spend less time and money on driving.  This frees us up to generate economic power.

Part of this sustainable urban revolution involves incorporating ecosystem vitality into social spaces.  “The interest in complete streets is part of a growing demand for retooling the rights-of-way in cities to reflect changing values that citizens have now,” says Clark Wilson, senior urban designer, with EPA’s Office of Policy, Economics, and Innovation. “Federal departments and agencies are responding by, for instance, including criteria related to livability and sustainability. This approach not only addresses community values, but also is more fiscally sound because of multiple objectives being met with limited funding.” (quoted from Sustainable Streets)

Although the challenge of delivering broader benefits through the design of public spaces is daunting, the expansion in value and the benefit for the public generated by such efforts is worth it.  If we invest now we’ll get eightfold benefits down the road.  This is an economic development opportunity we can be ambitious about, something we can incentivize, a common challenge that unites people and restores nature.  The building blocks for sustainable cities are sustainable streets.  We’ll get better results if we change our view of streets and redesign them  to include all forms of human movement beginning with the indispensible ones, walking and bicycling.  We can create streets that intentionally deliver ecosystem services.  When can create streets to serve a robust economy that matures with connected, equitable, and safe communities.  We’ll spend more time being here rather than passing through.  We have an opportunity to accomplish something great as a generation, and embark on a path of discovery.

The Centerlines newsletter from the National Center for Bicycling and Walking (bikewalk.org) is here:  http://www.bikewalk.org/newsletterarch2015.php