When we were considering moving to New Mexico it was 5150.  But the people and place welcomed us.  The character here is extraordinary.  We are confirming this daily. 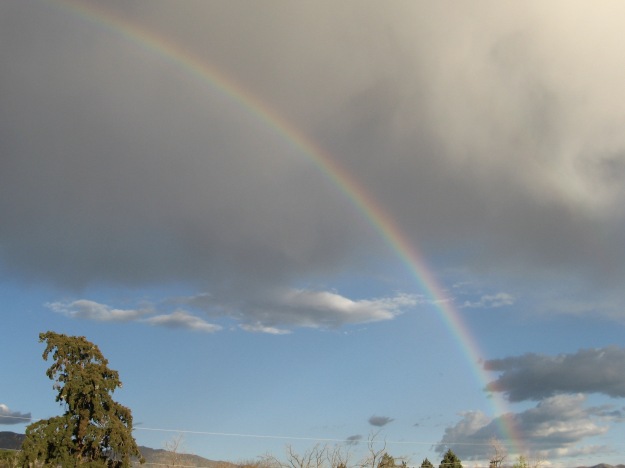 a rainbow on Sunday from our deck

I was riding back into town today from my lunch ride and I had a green light at the intersection with 4 Hills Road from my westbound direction on Route 66.  There were three cars lined up on eastbound Route 66 waiting to turn left across my lane to enter I-40.  I’m moving at about 20 mph and am the only traffic in my direction.  The first car turned left in front of me and had time to clear the intersection without interfering with my right of way.  But that turning action screened the car behind from having sight lines to me.  Once the first car cleared I wanted to connect with the driver of the second car to confirm that I’m visible.  I raised my left hand above my head gesturing a big hello.  The driver puts his left arm out his window and gives me the peace sign.  I pass on through the intersection knowing the driver sees me, but more than that, we recognize each other as friends.  Country manners in a city.

This type of connection happens regularly in Albuquerque.  There is a basic fabric of human community here that is extraordinary.  An ease of being and strong sense of place ground us.  When we were looking at moving here I rode my bike around the Sandias.  Climbing up Las Huertas on the narrow dirt road I had a driver of an old dented pickup flash me the peace sign and a smile as we edged by each other.  That was one of the moments that sold me on Albuquerque.  The people do the marketing.  Absolute genuineness. 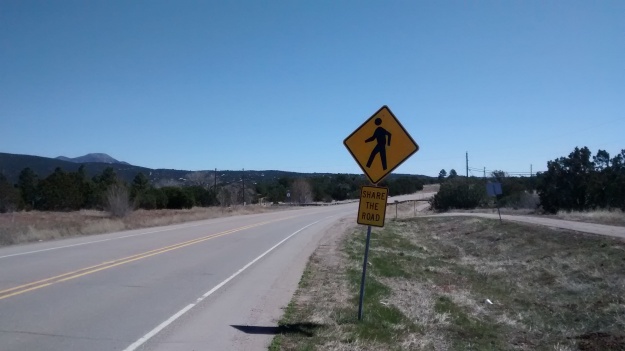 I’ve had a couple other experiences recently that reminded me that this is not your ordinary city.   Today I met Jim on my ride as we overlapped paths cruising down Frost Road.  Jim was riding a recumbent, the kind of bike you ride from a relaxed horizontal seating position.   He had two Papillon dogs with him (the youngest named Jazzy), a ham radio, a go pro video cam, and other assorted equipment.  It was neat meeting another person who views bicycling as a research platform.  But the center of our conversation was health, physical, spiritual and mental.  When you do a little bicycling and walking, it improves every aspect of life including social and economic.  If only we would increase the valuation of living in the present in our society.  Well, I think slowly we are regaining that focus.  And if you check out Jim’s blog you’ll get some nice centerpieces for the discussion, along with true east mountain and Albuquerque flavor to savor. 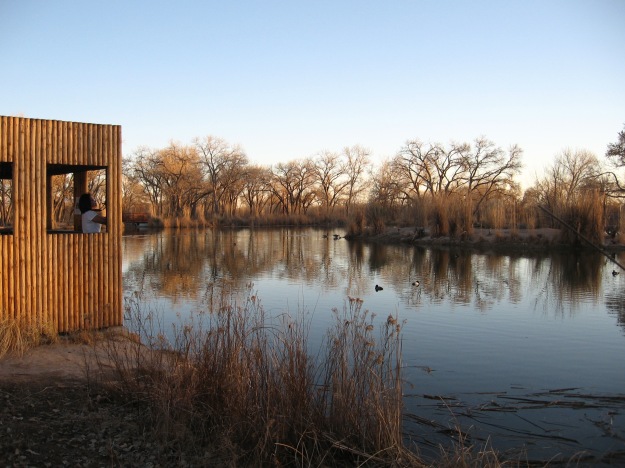 On Saturday, I rode with Dan to Bike-in Coffee on Old Town Farm.  This is a farm that serves fresh local food and hot coffee on the weekends to customers that ride in on bicycles.  It is just a few blocks from the urban core easily accessible off the ever popular Bosque River Trail in Albuquerque’s central green belt.  When we turned down the road entrance to the farm we cycled past two magnificent horses in pasture chewing on grasses.  We leaned our bikes against a farm fence and had steaming cups of Kona coffee.  Coffee before a ride is good, but coffee during a ride is exquisite.  Especially when you have it with fellow cyclists on a farm open to guests on the first full day of Spring with cherry blossoms opening and New Mexico blue sky aloft.  Bike-in Coffee invites you in to enjoy the finer things in life, which are quite simple.  While we were there we ran into many nice people including Tim from Urban ABQ.

Urban ABQ is an initiative advocating for a more vibrant city life including increased density, walkability and bikeability.  Their blog is one of the harbingers of the economic recovery happening here from the ground up.  It’s all about bringing the good energy in the people and place together creating a blueprint for a strong and lasting foundation.   Urban ABQ builds collaboration with downtown businesses, residents, urban planners and elected leadership and develops teamwork centered on common interests to the benefit of the entire city and State.  They put on the first CiQlovía, an open streets event that invites people out to experience their city in an up close walking and biking setting.

These three elements–Jim and his blog, Bike-in Coffee, and UrbanABQ–deserve more attention.  I’m aiming to do a spotlight piece on each one.  But in the meantime I thought I’d introduce you to them, and touch on that underlying thread that is a force for positive days here.  Let me leave you with farmer and poet Wendell Berry from Revolution Starts Small and Close to Home in Yes! magazine Spring 2015, a copy of which was loaned to me by a sponsor High Desert Yoga:
“Spending less, burning less, traveling less may be a relief.  A cooler, slower life may make us happier, more present to ourselves, and to others who need us to be present.  Because of such rewards, a large problem may be effectively addressed by the many small solutions that, after all, are necessary, no matter what the government might do.  The government might even do the right thing at last by imitating the people.”