The bike riding in and around Albuquerque, NM is very good.   Here are some photos from a ride I did on Friday late afternoon from our place through Tijeras Canyon and on to some quietly traveled east mountain roads.  I’ve been taking a Canon PowerShot A530 digital camera with me on some rides and hikes and shooting up the terrain.  Here’s a map of the heart of the route.  Living here is the best of both worlds.

path near Los Altos Park up and over Interstate 40

There is good riding in every direction in Albuquerque, and some real gems in town such as the Bosque Trail and the two mile La Luz climb off Tramway that gains almost 1000′.  But what draws me like the shining sun is the riding east out through Tijeras Canyon, the gateway to the East Mountains.  World class road riding.  I can take surface streets to Tijeras Canyon but I’ve been leaning towards the I-40 trail because it is a straight shot and goes underneath all the major streets such as Eubank and Juan Tabo. 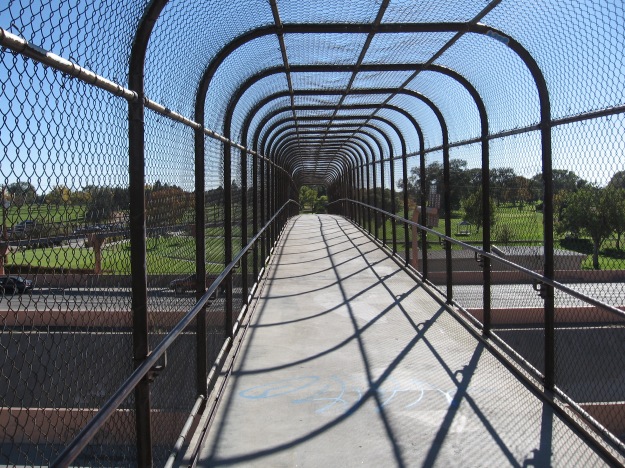 the I-40 trail takes you up and over the Interstate 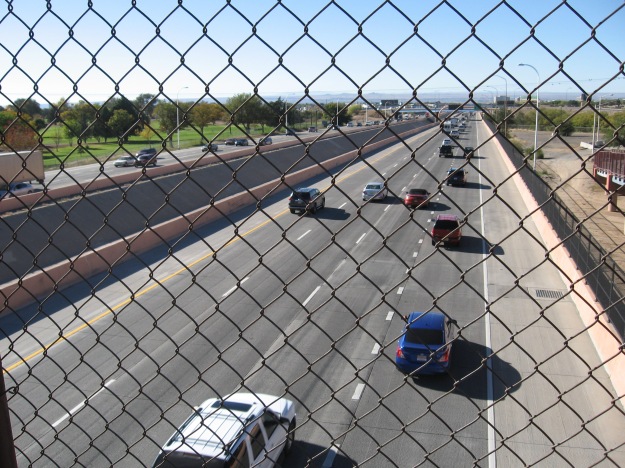 looking west from the I-40 bike/pedestrian bridge. Those three little bumps on the West Mesa are the volcanoes in Petroglyph National Monument

On the other (south) side of the pedestrian bridge looking back. Albuquerque must have 7 or 8 ped/bike bridges crossing over I-25 and I-40, and more on trail systems traversing major roads such as Tramway

heading past the KOA. This trail is more working class than Bosque, but that’s OK. Bosque Trail is a special ride through a nature preserve 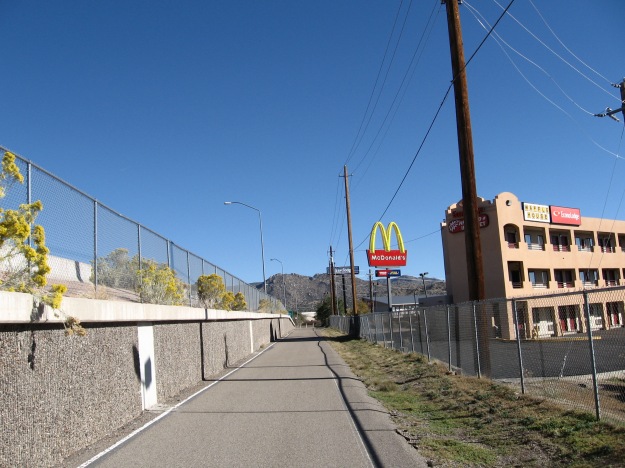 Ten minutes and I’ve broken the bounds of the City on past the Believers Center, soft spoken home of the local chapter of the Church of the Big Ring.  Best way to worship is to keep pedaling.  Faster. Longer.  Keep coming back!

Out on the open road. Town ends, country begins

Tijeras Canyon is old route 66, now 333 East.  The Interstate carries most of the traffic through this canyon gateway between the undulating high plains of eastern New Mexico and the spectacular Rio Grande valley which provides a home for most of New Mexico’s two million people.  Old route 66 is a sweet side road that carries you abruptly away from the city and out into the countryside that makes up most of New Mexico. 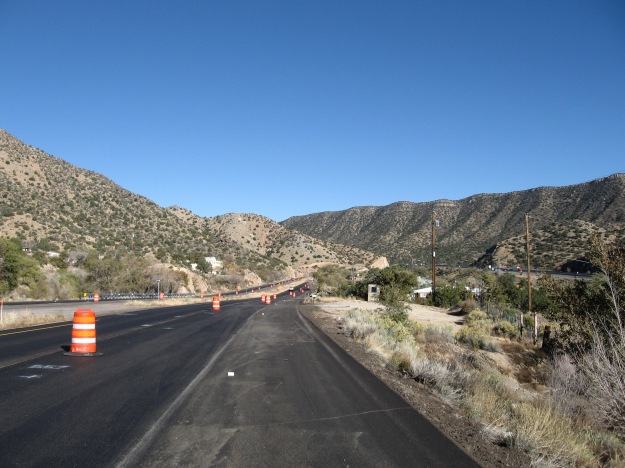 They are repaving Tijeras Canyon this Fall. They are providing a smooth new surface from edge to edge, all the way covering the full shoulder. Thank you!  The interstate is over in the far right of the picture.

beautiful work on this new pavement. THANK YOU! GRACIAS! ARIGATO!

About six or seven miles on old route 66 and one enters the Village of Tijeras.  It is a quiet country town with a bevy of roads leading up and out into the mountains.  There are also great frontage roads on both sides of the interstate continuing east.  Lots of wonderful riding options.  The mountain biking on this side of the Sandia and Manzano Mtns is absolutely outlandish.

a country road off old rt. 66, a beautiful road for bicycling indeed

Old friends in Flagstaff may recognize the backpack in the silhouette

Albuquerque’s bicycling movement has been grooving for a long time.  The Environmental Planning Commission recently recommended the bikeways and trails facility plan be forwarded to City Council for approval.  The city provides a nice bike map.  They mailed Mai and I copies for free many years ago.  I thought that was very nice and is one of the reasons I was encouraged to begin making plans to move here.

The riding in Albuquerque is as diverse as the cultures that live together in this mile high city.  The areas surrounding town are powerful draws for bicyclists.  The unity of city with the open space creates a wonderful mix.  This intersection of abundant nature along with a vibrant city life seems paradoxical, but here it is.  When I bicycle out Tijeras Canyon and back I experience startling diversity in one intimate and moderate ride.